At StartBox we’ve been talking about James Reason’s Swiss Cheese model of accident causation for quite a while. And so when an infographic appeared in popular media recently describing how to use it to combat a pandemic, it caught my eye. 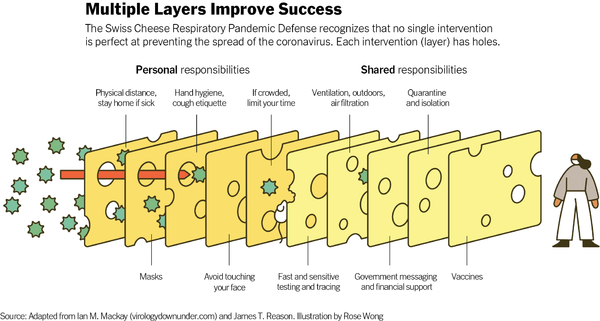 The New York Times interviewed virologist Ian Mackay, whose post on the topic was widely circulated on Twitter. It describes multiple layers of protection, each individually imperfect but contributing to the overall goal of reducing the spread of a SARS-CoV-2, the virus that causes Covid-19. Each of these layers of protection is represented by a slice of Swiss cheese, the imperfection being the hole in the cheese allowing the virus to pass through. The holes in the slices may or may not align, allowing or blocking the spread. And so the takeaway is that all the things that are being recommended by public health scientists and debated in the public matter: masks, distancing, hand washing, vaccinations. Just one of those things doesn’t solve the problem, but the multi-layered approach improves success.

The StartBox System employs a similar philosophy to preventing wrong site surgery. Errors can occur at many points in the continuum of care, and many individuals can both block and allow errors to pass to the next stage: in the clinic, during the scheduling of the procedure, at hospital check-in, and in the OR. An intervention system that can capture and report errors greatly improves the ability of healthcare providers to provide safe treatment to patients and stop wrong site surgery.